Some Towns Existing in 1850 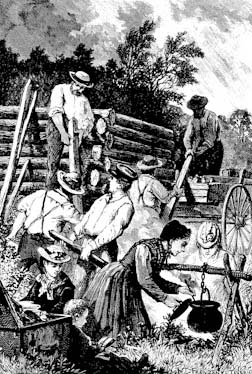 A few other early towns were in existance at this time in addition to those selected here.
(Source of most information: Arkansas Place Names by Ernie Deane, c1986)

Athens was the second county seat of Izard County. Located about three miles downstream from Calico Rock, the courthouse stood at the point where Piney Creek enters White River. The move was made in 1830, when Athens consisted of one store, grist mill, a blacksmith shop, saw mill and a tavern. The courthouse was a one-room building, twenty feet square. Athens faded away and nothing remains of the town today.

Augusta existed before Woodruff County came into being in 1862. Originally the town was known as Chickasaw Landing and was a port on the White River. Its founder was Thomas Hough, a merchant, although John Elliot owned the first store. Cotton in this delta county soon became the major crop and steamboats carried the bales down-river to market.

Hough changed the town's name to Augusta in honor of his niece, Augusta Cald of Virginia. His large brick home became the county courthouse in 1870.

By 1810 four families had settled on a piece of land between a bayou named Poke and the White River. The site grew into a settlement of 12 houses by 1819 and was platted as a town in 1822. That same year the town was selected as Independence County's permanent county seat.

Three decades later, in 1850s, Batesville was well past the frontier stage. It proudly possessed a number of businesses, a brick courthouse, a three-story city office building, a library, lodge halls, a several lawyers and doctors.

The town was named for James Woodson Bates, an attorney who came to Arkansas Territory about 1819. He moved to Batesville after having served as Arkansas Territory's first delegate to Congress while he lived in Arkansas Post.

Bolivar was described in its later years as a typical frontier town with 14 general stores, blacksmith shops, law and doctor's offices and saloons. Mercantile business was difficult to carry on there because goods had to be shipped by riverboat, then by wagon up Crowley's Ridge to the town.

In 1856 the county seat was moved to Harrisburg, which was named for the pioneer Harris family.

Cotton Plant was first called Richmond, but when William D. Lynch became postmaster, he had its name changed to Cotton Plant. He had earlier laid out the town after entering claim to the land in 1846.

In 1850 Cotton Plant and Augusta were the only towns in Woodruff County. Perhaps Cotton Plant got its name due to the main economic crop in that delta county.

Elizabeth became Jackson County Seat in 1839 and remained so until 1852. Shortly afterwards Jacksonport became the seat of justice. Still another change in that seat took place in 1892 when Newport took the title. By 1890 Elizabeth was little more than "a farm about two miles east of Newport."

Evening Shade grew from Ephriam Sharp's farm, where he had built a grist mill, sawmill, and carding machine. He is credited with giving the settlement, which later became Sharp County's seat of justice, its beautiful name. Some say that its name came about in recognition of the welcome shade the trees gave the village post office.

Ephriam Sharp was a member of the state legislature, and when a new county was formed in 1868 it was named for him.

Jacksonport wasn't named for President Jackson, as some think, but for Jackson County, Tennessee. The town was reportedly started by Thomas Tunstall. The first record of that name is mentioned on the 1835 petition asking for a road from Thomas Tunstall's sawmill at Jackson's Port to Litchfield.

When the railroad came through Jackson County in the early 1870s, it bypassed Jacksonport and served Newport. Jacksonport stayed the county seat until 1892. All that remains of its early days is the former courthouse, now a state park.

Kinderhook was the only post office in Cleburne County from 1837 to 1848. Located on the Batesville-Clinton Road just west of the Middle Fork of the Little Red River, it was only a short distance southwest of the present town of Edgemont. It is thought that the post office was named for President Martin Van Buren's home town of Kinderhook, near Albany, New York, since the president was nicknamed "Little Magician of Kinderhook." In 1891 the post office was moved a quarter mile from its original location and its postmistress, Sarah S.C. Morgan, reported that it then served 100 people.

Liberty was a tiny community on White River at the mouth of North Fork River when it was selected as the first seat of justice of Izard County in 1825. The two-story log home of Jacob Wolf, which still stands today, was selected as the courthouse in 1829. Prior to that time all county business had been conducted in circuit court. Wolf, who served as Izard County's first representative in the Territorial Legislature, had great influence in getting the county seat located at his place. When the railroad was being built up White River, the town was called "Devero," the name of a construction engineer. In 1907, the name was changed to Norfork, a contraction of the words North Fork. When the U.S. Army Corps of Engineers built a lake and dam nearby in the 1940s, they were also named Norfork.

Mount Olive became the third Izard County seat in 1826. It was located a few miles downstream from Athens and had been a landing for several years. A post office called "Pine Bayou" had been established there on December 27, 1831 and, in 1842, the name was changed to "New Athens" in honor of the old county seat village. After five years, the name was changed to Mt. Olive and it remains today as a small community on the White River, a few miles off State Highway 9. The courthouse at Mt. Olive was a two-room building which stood for more than a century. The seat of justice was moved to Melbourne on May 10, 1875.

Pilot Hill was the name of the first post office in what is now called Salem. The name was officially changed to Salem on February 20, 1872. After Fulton County was formed in November of 1842, a temporary seat of justice was in Peter Ground's home. The permanent county seat was established at Pilot Hill in 1843, a town founded by William P. Morris. Its later name, Salem, is a word dating back to Biblical times, when in Hebrew it meant "comfort heaven" or "peace."

Quitman was the name of the first approved post office, in 1848, in that area of Cleburne County. Most of its settlers had come there in the early 1840s from Virginia, Tennessee, and Alabama. The town of Quitman was named for Gen. John Anthony Quitman, a New York native who had served in the war with Mexico and later as governor of Mississippi. It is assumed that the town was named for him because many Southerners admired him.

Rapp's Barren in Baxter County was once a land of grass, bushes and open country. A Mr. Rapp had settled there in the 1830s. By 1858 a Male and Female Academy was established on the land of an early settler, Orrin L. Dodd. The area around his home was still known as Rapp's Barren, but Mr. Dodd also developed a plantation down along the White River near Augusta. According to local legend, the colonel's slaves, while traveling down the river, would boast about their "sweet mountain home" at Rapps' Barren. When the county was formed in 1873, its county seat at Rapp's Barren was called Mountain Home.

Searcy replaced a temporary county seat which was established at the house of David Crease, near the White Sulphur Springs. Commissioners selected a permanent site about 1837 and laid out a town to be named Searcy near the center of the county. It's streets were platted by Israel M. Moore, who is credited with naming the original streets for streets in Philadelphia.

The town was named for Richard Searcy, who was born in Tennessee and moved to Arkansas with early settlers. One of the territory's best known lawyers, he was appointed Territorial Court Judge for the Batesville district in 1823. He died in 1832.

Sulphur Rock is an old town, its post office being established in 1834 at the plantation of Captain Thomas T. Tunstall, more than four miles east of the present town. Tunstall's farm included a racetrack, plantation store and headquarters for his steamboating operations on the Mississippi, Arkansas and White rivers. Records show that Postmaster James E. Dunegan reestablished the Sulphur Rock post office at its present site in 1848.

The town was thriving when the railroad was constructed from Diaz to Batesville in 1883.

Yellville was selected as the permanent seat of justice because it was near the center of Marion County. Its earlier name was Shawneetown. Originally, the fertile site had been home to a large number of Shawnees living in their log cabins and harvesting corn near the banks of Crooked Creek.

Yellville was named for Archibald Yell, a distinguished Arkansas office holder and leader who died fighting in Mexico.

Back to the main page